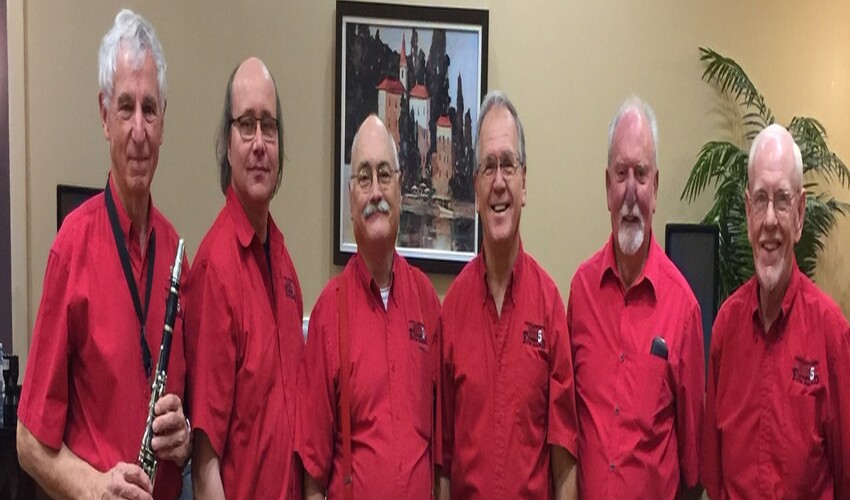 The London Dixie Five (or London Dixie 5 -- opinion is sharply divided on this very important issue) is a band devoted mostly to playing traditional Dixieland jazz, as it evolved during the first half of the 20th century, in the hands of such greats as Larry La Rocca, Bix Beiderbecke, Louis Armstrong, and Sidney Bechet, and was then re-incarnated in the 1950s as Traditional New Orleans jazz. We play this kind of music because we love it, and because it gives us so much musical liberty.

Our musical style is free improvisation on basic tunes. We almost never use arrangements. Our strong rhythm section keeps the beat and the chords going, and we play ensemble and individual solos around the melody, sometimes with a vocal thrown in. Our music is generally happy and upbeat, and features many familiar tunes, such as "When the saints go marching in".

The band was formed more than a decade ago. Membership has changed slowly over time. The original clarinetist, Stan Tucker, was succeeded by John Landstreet; drummer Dick Philp gave way to Jerry Valeriote, then to Brian Worsley, and now Jerry is back with us. The basic band now has five members: John Lloyd on cornet, trumpet, and flugel horn, John Landstreet on clarinet and alto saxophone, Bill Cox on four-string banjo, Wolfgang Beckmann on tuba, and Jerry Valeriote on drums. During the warm weather trombonist Ric Murray joins us.

But we also need help at times, so a selection of friends sometimes play with us, or replace one or more of us, singer Les Holmes, bassist Ann Pin or Art Covey, and soprano saxophonist and singer Creg Johnson.

We are available to play at special functions, dances, dinners, fund raisers, publicity events, and for retirement communities and community recreation activities. Please contact us if you would like more information.